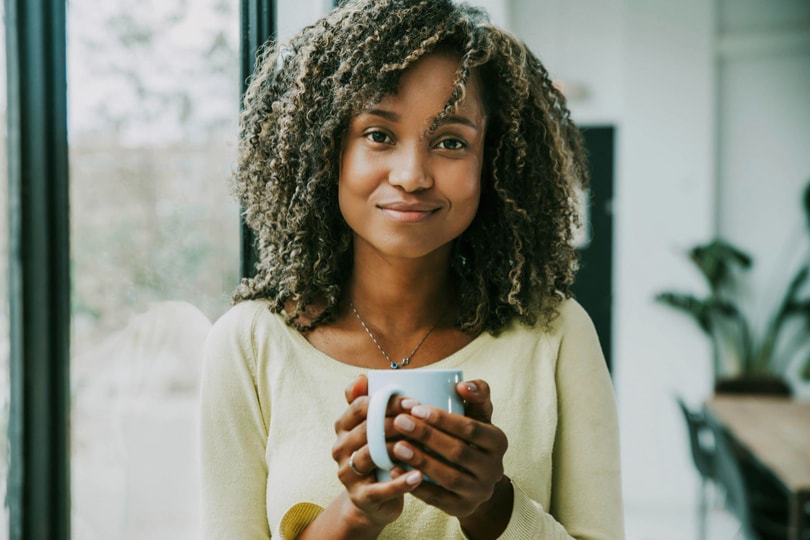 So, what’s the difference of psoriasis on black Afro-Caribbean skin compared to Caucasian ones? How is it diagnosed? Are there differences in how they look? These and more will be tackled in this article. 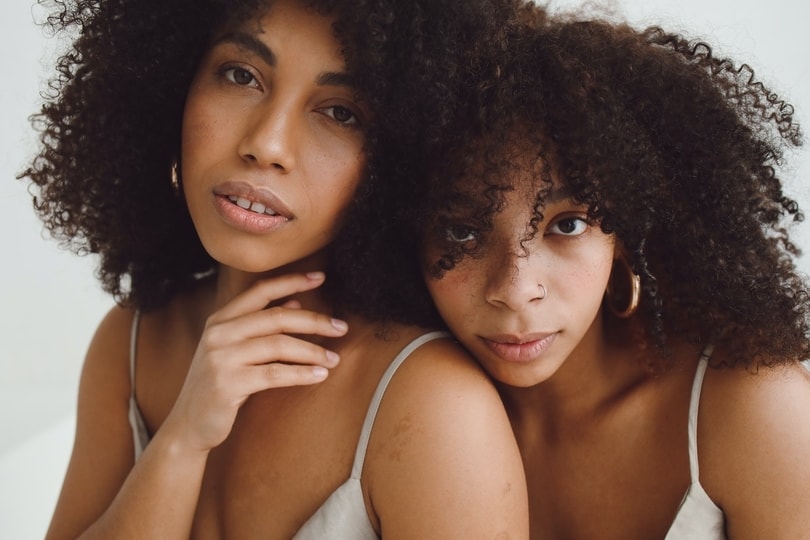 Psoriasis doesn’t discriminate between skin colours, genders, or races. However, psoriasis on dark skin, as well as on those with dark brown complexions, are often left undiagnosed or tend to be less reported compared to those who have light skin due to a variety of reasons. One of the main reasons as described by a study is that dermatologists examine dark skin less compared to those with whiter skin wherein the symptoms are more obvious.

Commercials and ads on psoriasis products mostly feature people with lighter skin. Psoriasis on black Afro-Caribbean skin is underrepresented, constituting only 6% of the commercials included in the 2020 study. Ads play a major role in awareness campaigns, especially on health-related topics like chronic conditions and skincare.

There are rarely pictures on the internet of psoriasis on skin of colour. Oftentimes, images feature psoriasis symptoms on people with whiter skin colour. This often leads to misconceptions that people with lighter skin colour are the only ones who develop psoriasis.

Seeing that there are rarely any people of colour on ads that have psoriasis gives the impression that the condition affects only a very small percentage of the population. This deters individuals from seeking treatment or suspecting that what they’re experiencing is already psoriasis. When they decide to see a professional, they’re shocked to get confirmation about their psoriasis.

Research shows that individuals with black Afro-Caribbean skin tend to experience more severe psoriasis as the condition affects a larger surface area. Those with darker skin complexion were found to be more prone to scalp psoriasis too.

Psoriasis patients are often challenged by cultural misinterpretations and social stigma. This causes symptoms to go far being physiological only as they also cause ill psychological effects and cause a decrease in the quality of life of patients.

How Does Psoriasis Look Like on Skin of Colour? 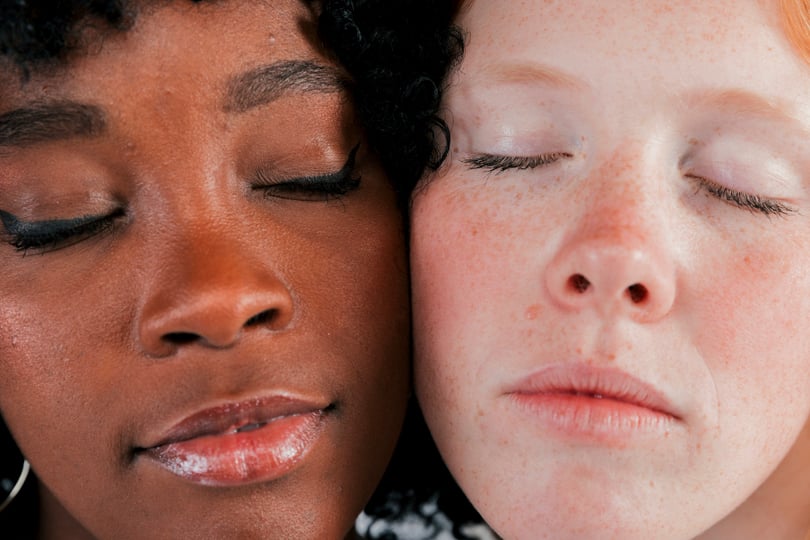 Symptoms of psoriasis include plaquing, itching, and reddening of the skin. These effects can be easily seen on people with whiter complexion, but that’s not the case for people of colour. Psoriasis on dark skin lacks representation, so people with darker skin tend to find more questions than answers when diagnosing symptoms or even finding solutions and treatments for their skin condition.

The symptoms of psoriasis on skin of colour are no different from what appears on lighter skin: scaling, flaking, itchiness, and thickening of the affected area also manifest on darker complexions. However, how they look may differ in appearance because of slight dissimilarities in the components found on the skin. Darker skin complexion has more melanin compared to light-coloured skin. This may affect how psoriasis appears on black Afro-Caribbean skin, making it difficult to diagnose the symptoms.

Thick plaques with silver scaling are how psoriasis on white skin usually appears. Additionally, the symptoms often appear on the legs, shoulders, arms, and chest areas.

There are skin conditions that look like psoriasis that make the diagnosis of darker skin more difficult. Fungal skin infections, for example, have the same scaling and itching as symptoms. Lichen planus is an autoimmune skin condition that appears as purplish skin bumps. Eczema, another common chronic skin condition, manifests as reddening skin. However, on darker complexions, the symptoms may look greyish or purplish without scales.

These observations explain why the skin condition can be often mistaken for another. There’s not enough sample or study on the subject to increase familiarity even among professionals.

Psoriasis flare-ups appear to be more severe in people of colour compared to white people as shown in a study published in The Journal of Clinical and Aesthetic Dermatology. With this in mind, experts recommend that individuals immediately consult a dermatologist in case they experience psoriasis symptoms.

Once the redness subsides, the affected area may develop light spots that are more visible because of the contrasting colours. The skin also remains thickened similar to what happens on lighter skin.

The aftermath of the appearance of symptoms also differs between those with lighter and darker skin. Psoriasis on black Afro-Caribbean skin may leave discoloration or post-inflammatory dyspigmentation that can last for months. This can be confused with active psoriasis, so it’s better to consult a doctor before applying any topical steroid treatment on the affected area. 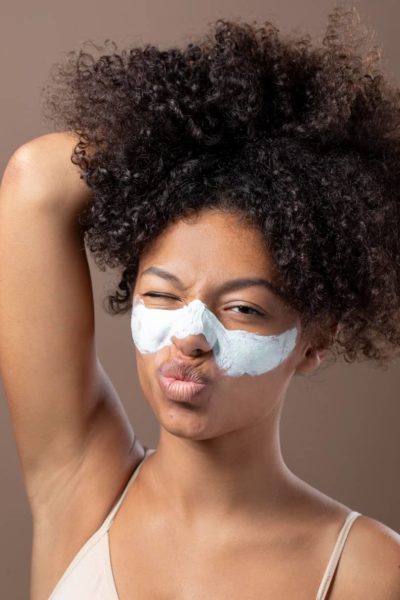 The undertreatment of psoriasis on dark skin is not due to discrimination or lack of concern. It stems more from the inaccessibility to more relevant information and studies that make it harder for doctors and patients alike to recognize psoriasis.

Due to the lack of familiarity and relatively fewer studies on psoriasis on skin of colour, some dermatologists are less confident in diagnosing psoriasis on dark skin. Having fewer materials and experience in assessing such situations, experts tend to misdiagnose or give simpler solutions to avoid exacerbating the skin condition in case they got it wrong.

Psoriasis affects all skin types and colour is not the sole consideration for selecting treatment options. Creams and ointments are the primary defence for dealing with psoriasis symptoms, but more serious conditions call for more aggressive therapies.

Skin phototherapy, for instance, is effective on Caucasians with psoriasis-prone skin. However, applying the psoriasis treatment to people of Afro-Caribbean origin or individuals with darker skin tones, side effects should be thoroughly discussed first. Phototherapy treatment on darker skin types has a higher risk of developing increased pigmentation. Exposure to UV rays may also exacerbate post-inflammatory hyperpigmentation.

Medovie is here to help everyone, irrespectively of origin, race, sex or other. The brand promises real results to people suffering from psoriasis, irrespective of their skin type or race. It is for EVERYONE.

People of Afro-Caribbean origin suffering from psoriasis need an accessible product that’s safe to use for restoring psoriasis-prone skin. They need a trusted product that doesn’t contain steroids to avoid worsening inflammation while soothing irritation caused by psoriasis symptoms. With all these criteria in mind, Medovie products can be considered among the best options.

Medovie products are made from the extract of three of the most powerful botanicals in Traditional Chinese medicine. Since they’re based on natural ingredients, they’re safe to use by individuals with sensitive skin, regardless of their skin type. They don’t have side effects and can be used by almost anyone suffering from psoriasis and similar chronic skin conditions.

You can consult our skin care experts to learn more about Medovie products.