The Difference Between Psoriasis and Eczema 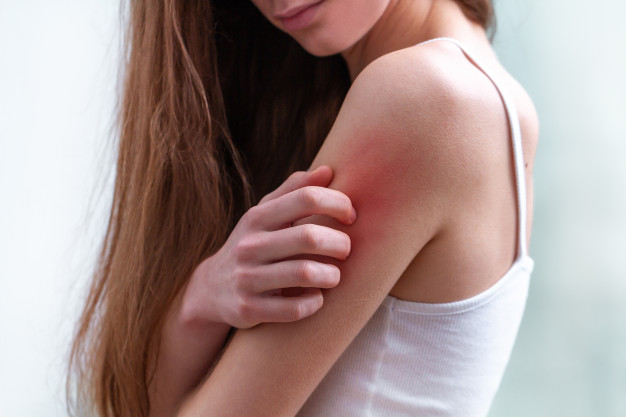 Psoriasis and eczema are some of the most frustrating skin conditions to deal with. They develop almost the same symptoms, so it can be confusing to determine which of the two skin problems you have.

Experienced dermatologists can easily spot the difference between eczema and psoriasis. But to someone with an untrained eye, it’ll be hard to pinpoint which of the two skin problems you’re suffering from.

It’s easy to mistake one from the other, so we made a guide that will help you determine the difference between psoriasis and eczema.

Psoriasis is an autoimmune problem that manifests in the hyper proliferation of the skin. 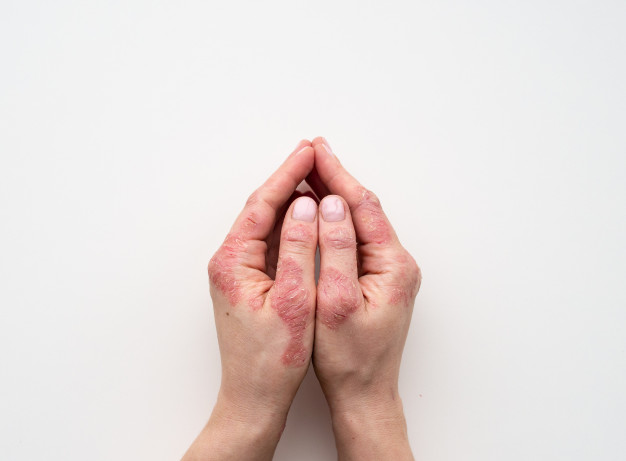 Skin cells are normally replaced by the body every 3 to 4 weeks. However, psoriasis hastens this process, resulting in a production time of only 3 to 7 days. This results in cells piling on top of each other, forming a white scale on top of the supposed normal skin layer.

Psoriasis equally affects both men and women. It is a long-lasting condition that involves periods of experiencing mild symptoms, followed by moderate to severe symptoms. In the UK, an estimated 2-3% of the population has psoriasis.

Oftentimes, psoriasis only causes mild irritation. But severe cases can impact the quality of life and affect confidence, especially when the skin problem is highly visible.

There’s currently no permanent cure for the condition, but there are psoriasis treatments that can alleviate the symptoms.

Eczema is a skin condition that’s described by inflamed and itchy skin with a rash-like appearance. There are around 7 known types of eczema, with atopic dermatitis being the most common among them. 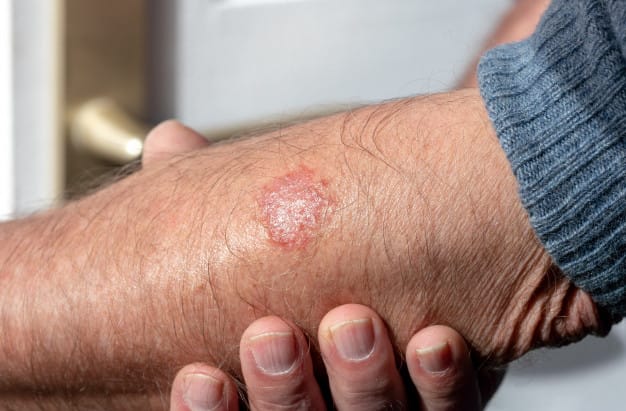 According to research, mutations in the gene responsible for forming the protective layer of the skin have been found in eczema patients. The changes in the gene make the skin more prone to flare-ups and other skin conditions.

Like psoriasis, eczema isn’t contagious, so you don’t have to worry about transferring it through contact with another person.

There’s still no permanent cure for eczema. However, eczema treatments for alleviating symptoms abound on the market.

Differences Between Psoriasis and Eczema

Here are the similarities and differences between the two skin conditions:

One of the symptoms of eczema is inflamed reddish skin. The affected area can be scaly or crusty. When you touch the inflamed area, you’ll feel that it’s rough, leathery, and swollen.

On the other hand, psoriasis symptoms include reddish patching on the skin. It may also appear silvery, scaly, and swollen. On a closer look, the inflamed area will appear thicker compared to eczema.

The symptoms of psoriasis and eczema somehow look the same, making it difficult to distinguish which is which.

For eczema, you’ll feel intense itching to the point that you can bleed from excessive scratching.

With psoriasis, you’ll feel a stinging or burning sensation in the affected area. It may be itchy, but scratching doesn’t seem to resolve the issue.

You or your family members may have a history of asthma or hay fever, both of which increase the chance of developing eczema. The onset of eczema symptoms is often associated with having dry and sensitive skin.

Psoriasis, on the other hand, is usually associated with underlying health conditions. Diabetes, depression, or heart condition can cause psoriasis symptoms to appear.

The triggers for psoriasis and eczema are different.

Psoriasis symptoms are often triggered by infection and stress. However, flare-ups are also possible when you get injured by scratches, sunburn, or vaccination. Medications can also trigger the symptoms of the skin problem.

Climate also plays a huge role in experiencing eczema symptoms. A humid and dry climate sucks out the moisture on the skin, exposing it to pollutants and increasing the chance of flare-ups. During the winter season, psoriasis symptoms become more aggressive, calling for more effective solutions that can quickly alleviate the itching.

If you have eczema, your skin will probably become too sensitive to heat and sunlight. Summer will be your worst enemy because you’ll be perspiring a lot and sweat triggers intense flare-ups.

Eczema starts to appear at a young age. Children and babies may already show mild eczema symptoms. The symptoms just worsen as they grow older.

Although unusual, it’s still possible for adults to develop eczema. Oftentimes, symptoms show up in adults due to underlying health problems, hormonal imbalances, and stress.

Psoriasis, on the other hand, shows up in teens and adults between ages 15 to 35. Contrarily, unlike eczema, psoriasis rarely develops during infancy.

Another notable difference between psoriasis and eczema is where they’re often found.

Eczema often appears on areas like the inner elbow, the back of the knees, the neck, wrists, and ankles. Babies often have it worse because you’ll find eczema growing on their chin, scalp, cheeks, back, chest, arms, and legs.

Psoriasis, on the other hand, appears on elbows, knees, scalp, face, palms, lower back, and soles. Sometimes, you’ll also see them on the ears, eyelids, mouth, lips, fingernails, toenails, and excess skin folds.

Eczema treatment for mild to moderate cases involves the use of topical creams for managing inflammation. For severe cases, drugs that affect your immune system may be recommended.

The treatment for mild and limited psoriasis will usually involve the application of topical creams. For severe cases, stronger medications may be given, depending on your doctor’s prescription.

Ample sunlight can be a blessing if you have psoriasis. The UVB light emitted by the early morning sun is said to slow down the abnormal growth of your skin cells. However, always keep sunbathing in moderation as overexposure can also trigger psoriasis symptoms such as itching and redding skin.

Neither skin problem is contagious. However, when left untreated, they can lead to infections that are more problematic to deal with.

Regardless of whether you have a mild or severe case of either skin condition, it’s best to consult a qualified dermatologist or skin expert before applying any medication. Self-medicating may lead to unwanted results that can even worsen your skin problem.

Managing Psoriasis and Eczema With Medovie

There are many over-the-counter medications available for calming skin conditions such as psoriasis and eczema. Some of them may work for a short period and then become ineffective later. Others have harmful chemicals that are too strong for sensitive skin, worsening your skin problem instead of alleviating the symptoms. 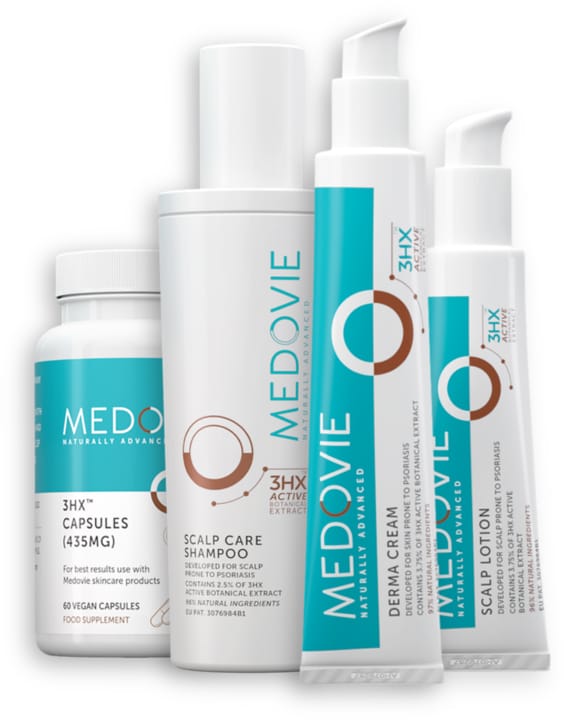 Medovie skincare products are designed for effectively managing eczema and psoriasis symptoms. We have body, skin, and scalp skincare plans you can buy as a package so you don’t have to look for other brands to address the different skin areas affected.

Medovie products are made from natural ingredients that are gentle on sensitive skin. Unlike other ointments and creams, our products are 96% natural. We use only components with the highest active ingredients to maintain potency.

Medovie is formulated with our patented 3HX formula, which is a combination of the three most powerful botanicals found in traditional Chinese medicine. Our creams, shampoos, and capsules all work together to manage the symptoms of skin conditions internally and externally for a longer-lasting effect.

Our skincare solutions are made to soothe and revitalize the skin affected by psoriasis and eczema. Our products can also be used to alleviate other chronic skin conditions with symptoms of flaking, dryness, and itching.

The usage of our skincare products will depend on the severity of the symptoms of your skin condition. Instead of self-medicating, it’s best to set a meeting with our Medovie skincare experts to get the appropriate product application.

For queries and concerns regarding our skincare products, feel free to contact us anytime.